Dental Training with a Vision 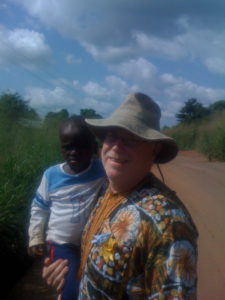 Tom was solely responsible for developing the optometry program. He trained himself with the material that was available from i-Tech and modified it to better suit the circumstances in Sierra Leone. He discovered the Lions Club as a source for eyeglasses that could be used in the program and even joined the club to support its efforts. In Sierra Leone he trained those who continue to this day to work in the optometry department of Morningstar Clinic to make a difference in the lives of those who can not otherwise afford eyeglasses.

Prior to going to Sierra Leone, Tom had been involved in short term missions for years. His trips included English camps and marriage building seminars in the Czech Republic, construction work in Costa Rica and Kentucky, and a medical/dental/evangelism trip on the Amazon in Brazil.

In May of 2012 Tom suffered a stroke that disabled him and ended his trips to Sierra Leone but not the work he started there. On the morning of February 8, 2017 he passed away peacefully at his home with his wife Dawn at his side. The program continues to operate in his absence, providing eyeglasses to the poor, making a significant difference in their lives. The team in Sierra Leone has decided to name the optometry department in the clinic in his memory.

Tom received his bachelors degree in criminal justice from Southern Illinois University in 1978. He worked in law enforcement all his life on patrol, in major investigations, the drug unit, the SWAT team, assistant to the chief of police, internal investigations, the ROPE program and the DARE program. Tom retired February 7, 2017 after 27 years of service. He was involved in the community playing Santa Claus for the children for many years, was a member of the Lions Club in Elgin, leader in Boy Scouts, part of Kids Hope program at the local elementary school, and much more.

To Mail a Donation; Send to

The Need in Sierra Leone